While I wait to see about a line on possibly obtaining some long-sought after workbee filming miniature reference photos, I have been doing some illustrating and 3D modeling in order to help out a Facebook friend’s project. He and few others have been working on blueprints for a “refit”-era, i.e. within the timeframe that Star Trek: The Motion Picture (ST:TMP) is set, Federation-class dreadnought.

To that end, I had taken a break on the workbee and been doing more work on working up the detailed illustrations and 3D models of the warp engines. Specifically the structure (both internally and externally) of the aft section of the nacelles.

This required not only getting the external shape correct, but also doing a deep-dive analysis of the paneling that makes up the outer skin of the nacelle. I’m doing this so that the internal structure of the nacelle could be worked up that matches and justifies the external panels we see on the original filming model.

Scene from Star Trek:The Motion Picture showing the subtle paneling on the aft portion of the warp nacelle.

The paneling on the original USS Enterprise model was actually painted by Paul Olsen in 1979, using five different colors of pearlescent lacquer paints over a smooth white base coat. When filmed the very subtle pearlescent colors would become visible when light raked over the model at an acute angle. This gave the illusion of a metallic skin.

The painted-on paneling was actually a fairly complex a pattern, and was conceived of as being individual external metal plating, or “skin”, of the hull of the vessel. Much the same way on aircraft or naval vessels, you can see the seam or rivet lines of the outer skin of the craft which is welded and/or rivets onto an underlying rib structure. 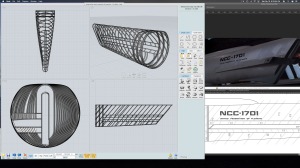 So working backwards from what paneling can be gleaned of the original painted paneling as seen in ST:TMP, I have sought to work out and justify a logical internal structure. It is going along rather well after spending quite some time pouring over all the available screen captures and reference photos of the model.

Not only has is this allowing me to build a highly detailed 3D model for the dreadnought project, but will also serve as a hyper-accurate painting guide for the Enterprise model build(s) down-the-road. While there are some great painting masks for the Enterprise that are available for molders to use, they have some missing details and are not 100% accurate, as there are some subtle spacing differences of the ribs/panels which most of the painting guides and masking kits don’t account for.

As to the workbee photos, I am waiting to see if a guy I had a conversation with online who previously worked at Foundation Imaging, the CGI animation company (now defunct) that did the CGI work for the television series Star Trek: Enterprise, and more relevantly, the additional FX shots for the Director’s Edition of ST:TMP. When Foundation worked on the latter, they requested and received the orignal filming model of the USS Enterprise from the movie, as well as the K’t’inga-class Klingon cruiser model (seen in the opening scene of TMP) and the workbee model.

He stated that he might have photos of the workbee, and would also reach out to some of the people he worked with back in 2006 when Foundation photographed and videoed the model extensively in order to make CGI models of the Director’s Edition DVD.

So with any luck, I will finally get ahold of the long-sought after bottom and aft view detailed photos to reference and work from.