Just listening some new music from while continuing to work on digitally re-drawing and 3D modeling the Enterprise B/C deck where the Officer’s Lounge is. Nothing makes my inner-geek happier than doing the above while listening to great new album Quantum Gate from Tangerine Dream.

Tangerine Dream is a German electronic music band founded in 1967 by Edgar Froese. The group has seen many personnel changes over the years, with Froese being the only continuous member until his death in January 2015. The best known line-up of the group was its mid-70s trio of Froese, Christopher Franke, and Peter Baumann. In the late 1970s, Johannes Schmoelling replaced Baumann. Since Froese’s death in 2015, the group has been under the leadership of Thorsten Quaeschning (Froese’s chosen successor who joined the group in 2005).

Cross section profile of the
front portion of the Enterprise B/C Deck.
(Third Wave Design)

Tangerine Dream is considered by many as a pioneer in electronic music. Their work produced albums that had a pivotal role in the development of the German musical scene known as kosmische musik German for “cosmic music”. Their work on Virgin Records, produced albums which continued to explore synthesizers and sequencers, including the UK top 20 albums Phaedra (1974) and Rubycon (1975).

The went on to have had a successful career composing film soundtracks, creating over sixty scores. Many of the more iconic soundtracks and movies they worked on are for such films run the gamut of genres. From as William Friedkin‘s stylistic existential thriller Sorcerer, starring Roy Scheider to the visually eye-popping fantasy film Legend by Ridley Scott (of Alien and Blade Runner fame)… to a 1980s movie starring a young Anthony Edwards about the panic in Los Angeles as the threat of nuclear war erupts. It begins when a missile operator making a wrong phone call, escalating to frantic race together out of the city in Miracle Mile.

Risky Business, which Tangerine Dream
did the majority of the film score.

They worked on a couple of Michael Mann‘s films, such as the neo-noir crime film Thief which starred James Caan, and his 1983 supernatural horror film The Keep about an uninhabited citadel (the “Keep” of the title) in Nazi occupied World War II Romania which contains a dangerous demonic entity.

Other supernatural films they scored were the movie adaptation of Stephen King’s Firestarter, the stylish Near Dark, which upends the vampire genre by placing it in modern-day rural Oklahoma and Texas. It’s cast consisted Adrian Pasdar and Jenny Wright and a vagabond vampire clan is made of mostly by actors who starred in James Cameron,’s blockbuster sci-fi film Aliens. They include Lance Henriksen (who played Bishop in Aliens), Bill Paxton (Hudson) and Jenette Goldstein (Vasquez).

Of course one of their most iconic film scores was, Risky Business. The theme track, “Love on a Real Train (Risky Business)” is one I could simply have play for hours. It is such a highly evocative piece of music. There work is what gave the film most of its stylistic undertones. 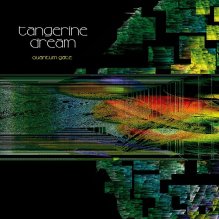 So their newest studio album, entitled Quantum Gate,  was released on 29 September 29, 2017 coinciding and celebrating the 50th anniversary of the foundation of the band.

It has a complex and is at once very much a Tangerine Dream album in the best sense, but also one that explores some new ground. As one music reviewer Malcolm Dome put it:

“This is a fresh phase in the iconic ensemble’s ongoing career, one that Froese himself wanted to embrace the esoteric subject of quantum physics. And although he’s obviously physically absent here, nonetheless the music has his imprint, because Froese left behind extensive sketches as to how the album should be approached.

Thorsten Quaeschning, Ulrich Schnauss and Hoshiko Yamane – the musicians who are now guiding the band’s creativity – have taken on the challenge of bringing Froese’s artistic aspirations to reality. And they’ve done it with zest, desire and no little brilliance. But this isn’t just about the three delivering what their late leader would have wanted – they’ve also added in their own touches to give contemporary meaning to what is a tough subject to make palatable in a musical sense.

Sensing Elements opens up by giving the listener a taste of the band’s aspirations. It veers from ambient to claustrophobic, as the protagonists show they aren’t prepared to merely tread well-worn Tangerine Dream pathways, but are committed to making the electronic scope sound experimental, all while never losing sight of the fact that they intend to encourage you to willingly go with them on this journey into the unknown.

At times the presentation is terrifying in its alienation, as on Granular Blankets, while at others there’s an undercurrent of calm, most notably on Non-Locality Destination. Proton Bonfire has the whiff of turmoil masquerading as controlled musicality, a duality that’s evident throughout the album. The notion of presenting quantum physics in this form should be one of confusion. After all, it’s a subject that’s still puzzling the finest scientific brains. In this respect, Quantum Gate can be said to be the soundtrack to our wide-eyed ignorance while standing on the precipice of scientific knowledge.”

One of my personal favorite tracks—aside from the opening aforementioned Sensing Elements—is Identity Proven Matrix. It has an eerie, building cadence, which somehow manages to be simultaneously ambient, yet also escalating into a pulsing synthetic march. It has an aural space to it but also some unexpected surprises. A halting mid-track sonic implosion.

Anyway, it is an album that has some nice mood music to geek out with while working on my Enterprise project.