The other day I cross-posted my piece about my work-in-progress digital 3D model of the travel pod door over in the Star Trek prop community at The Fleet Workshop. In the thread there that followed, Scott Fe asked some questions which lead to some more explanations about my travel pod door model exploration.

With his permission I am sharing the exchange here since I think it adds to and expands on the topic of the previous post.

The first part of several of Scott’s questions in a comment was:

is the presumption is that the travel pod doors retract into the ship or space station it is docked with?

That was the concept in the design sketch and drawings that Andrew Probert did, which where then built in both the Enterprise docking port as well as the orbital office docking port models. Look closely at both the sketch and screengrab you will see the receiving pocket and grabber mechanisms.

It is also pretty clearly shown in the concept sketch (the right-hand portion in the Probert drawing shown on the right) with the door-grabber mechanism which grabs the two door halves and pulls them apart (in similar fashion to pocket doors) into the ship/station docking port walls.

They slide out of slits in the docking ring?

Though to be be 100% accurate in the description, the doors are are basically flush on the outside of the docking ring. They are the lighter color portions I have highlighted in yellow as seen in this 3/4 aft view on the right of the filming miniature (before it was modified with the addition of and reworking of the side-waist lighting soffit around the belly of the vehicle and addition of the louvered headlights).

Is that workable based on the design?

For the most part yes.

Though there are some additional considerations and some challenges with the design from a practical perspective. It definitely has both pros and cons verses a swing hatch (which is what the ISS, Space Shuttles, Apollo, all had/have).

The pros are that this type of pocket door design is far more efficient in terms of interior space on either side of the door than a swing hatch would allow. An inward swinging round hatch would not be practical since it would basically sweep inward in a way that would render almost half the interior space within the travel pod useless when trying to open up the hatch. Everyone would have to basically squeeze into the forward half of the interior space in order to simply allow the hatch to be opened. Any more than two or three people and you would have to climb up on the travel pod’s dashboard. (wry grin) 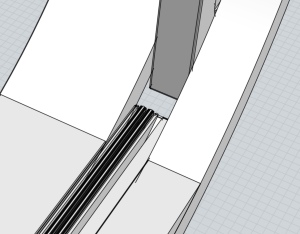 Detail of the travel pod door 3D model, showing a gap
when the door is opened as far as shown in the film.
(Image: Third Wave Design)

So the only viable option with a swing hatch design would be if it opened outward into the ship/station you docked with. Which of course means you would need that same amount of clear open space to open the door on that side of the hatch.

In short, a swing hatch would chew up a lot of deck space on the station/ship side of the door vs. this design.

This design also is a back-up docking clamp in that once the doors are pulled open into the receiving pocket, the doors are a secondary way to assure the shuttle/travel pod stays securely mated to that docking port.

On of the main cons of this design are that the docking port pockets the doors are pulled into have to have a fully airtight seal surrounding the doors.

Work-in-progress 3D model with the exterior inset shapes of the travel pod doors highlighted in yellow, which would vent air to space without docking port seals.
(Image: Third Wave Design)

This is due to two things:

First, the doors when pulled as far open as shown in the film (when Kirk and Scotty board the travel pod on the Orbital Office) there is an almost 1/2 a foot gap created where the curvature of the docking ring and the vertical face of the door go past each other.

This gap is shown in a close-up of the 3D work-in-progress model in the above. 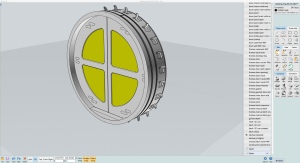 Interior face of the travel pod doors, with the other problematic inset shapes highlighted in yellow.
(Image: Third Wave Design)

Second, the inner and outer faces of the doors have recessed shapes in them which, as the doors begin to slide out, would vent atmosphere to space unless (as with the previous issue mentioned) the entire door outer edges (where they match the receiving pockets) it had a surrounding seal. The offending dembossed shaped are highlighted in yellow in these two shots of the 3D work-in-progress model on the right.

All-in-all, a swing hatch is easier to get a secure seal. Whereas sliding doors are a bitch to seal air-tight even without any debossing of its surface.

So beyond hatches being far less efficient interior space they are much harder to make them electronically motorized to safely open and close vs. the pocket doors with grabber mechanism. This design would allow for a fairly simple automated system vs. the manual hatches NASA builds.

Close-up of the model with an example set of sealing rings which would solve the air leak issue when the doors were open.

In this next screenshot of the work-in-progress 3D model shown on the right, I have the areas highlighted in yellow which—if there was a set of expandable dielectric elastomer sealing rings—would solve the door seal issues when docked and the doors opening.

A set of rings (critically on the side of the door away from the ship/station door) expanding around the docking ring would stop any venting of atmosphere into space as the doors were opening (and of course remained open).

In this version of the model I have this set of sealing rings on the travel pod/shuttle side of things. Though it could be just as easily put on the docking port side and simply be a set of seals surrounding the receiving door pockets.

I am leaning towards the latter option for several reasons.

One, while there are very faint ring lines on the filming model where these seals are on the docking collar, they are not pronounced enough to be reasonably justified as expanding seals made of a different material than the docking collar.

Two, since the doors would only be opened via the door-grabber mechanism, which is built into the docking port itself already, it would make more sense having the expanding seals as part of a singular automated docking system. So when activated, the seals expand against the docking collar and once that is sensed by the system, only then would the door grabbers move forward, grab the doors and only then pull them open into the receiving pockets. There would be no need for signaling between two systems (one on the ship/station side the other on the travel pod/shuttle side).