While still trying to recuperate from a case of viral bronchitis, I did manage to do some more work this evening on the side-view Starfleet human form factor illustrations.

I spent a good deal of time checking a myriad reference photos of the uniform materials and colors used for the costumes in Star Trek: The Motion Picture. I managed to arrive at a good set of color swatches that match the various uniform colors, as well as coming up with light and dark versions of the base colors for highlights and shadows within the illustrations.

Side-view human form factor illustration.
The figure is wearing the Starfleet Class A
uniform (type 1) and is shown in standing
and sitting variations.
(Click to enlarge)

Like I had done with coming up with the color naming conventions for the cargo pod labels to be used in the cargo bay and workbee cargo modules, I further refined and expanded the “Starfleet” color naming convention. I took a cue from wanting to have a theorized Starfleet Standard “SF” color library along the lines of the Federal Standard color system used by the United States Federal Government (particular in its Department of Defense and OSHA applications).

The numbering system is actually a code derived from the HSB color model within the Adobe Creative Suite software. The HSB color model (also called HSV or HSL models) is based on the human perception of color. It describes three fundamental characteristics of color in the visible spectrum: 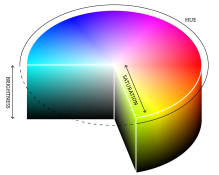 Diagram of the HSB color model.

Hue refers to the color reflected from or transmitted through an object. It is measured as a location on the standard color wheel, expressed as a degree between 0 and 360. In common use, hue is identified by the name of the color, such as red, orange, or green.

The strength or purity of the color. Saturation, which is sometimes called chroma, represents the amount of gray in proportion to the hue, measured as a percentage from 0 (gray) to 100 (fully saturated). On the standard color wheel, saturation increases from the center to the edge.

Brightness refers to the relative lightness or darkness of the color, usually measured as a percentage from 0 (black) to 100 (white).

Example of color swatches utilizing the
“SF” (Starfleet) color coding system I have developed, based on the HSB color model.

There is also a Pantone Matching System (PMS) number with the swatches for actual print/press reproduction color matching purposes. Pantone is the print industry standard for color matching.

I intend to add another two-digit code after a hyphen to represent the reflectivity or sheen of the color in paint or coating applications where it will range between (00-10) to represent flat (00) to satin (05) to gloss (07) to chrome/mirror (10).

At this stage I have not added that to the illustrations, but may circle back to it down-the-road. It will definitely come into play and will need to be determined when arriving at finish colors for the final drawings when transitioning into model fabrication mode.

In addition to coming up with the uniform color matching that I am satisfied with, I finally finished up the initial round of my seated figure illustration. The seating angle I went with initially are for “relaxed” chair seating angle, like you would find in the officer lounge and mess areas. Those angles are, like the human form proportions, derived from the ergonomic data and illustrations from The Measure of Man and Woman: Human Factors in Design, by Alvin R. Tilley, Henry Dreyfuss Associates, first published in 1993.

Set blueprint of the ‘Captain’s Chair’ drawn
by ‘M. Monsos’ on June 7, 1978 under the
art direction of Harold Michelson.

I will also likely do another set of seated figures next which will have the figure sitting in the “work seating” angle position. But hopefully I will have more definitive reference material for bridge and workstation seating as designed for the movie sets, after the conclusion of a Star Trek blueprint auction being held at the moment. That auction has bunch of set blueprints created by Paramount Pictures in 1978-1979 for the filming of the movie.

In particular they have a blueprint of Captain Kirk’s command chair for the movie. While a version of the bridge chair illustration appeared in the David Kimble “official blueprints” published in 1980 as a tie-in for the movie, It was somewhat simplified and did not contain any of the actual dimensions.

The ones I am bidding on are the actual construction blueprints used to make the actual seat pieces, and has all the relevant dimensions for the set-crews actually build the chairs for the movie. Another six days before that online auction closes.

The design of the chair has taken on a bit of added interest for me due to it the fact that in my conversation with Richard Taylor, he mentions pushing for, and finally convincing Gene Roddenberry, to incorporate safety restraints into the design of the chairs. Hence to the fold-over arm lap-restraints that featured in the wormhole sequence of the film.